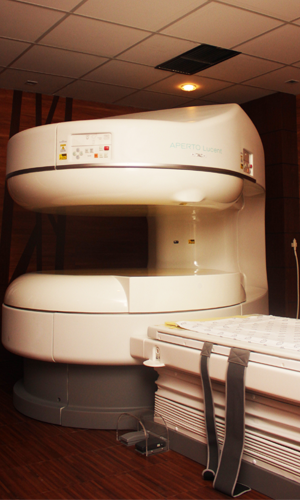 Magnetic Resonance Imaging (MRI) is performed using a specialized scanner, a patient table, systems that generate radio waves and magnetic fields, and a computer workstation. The scanner, which is usually shaped like a large rectangle with a hole in the center, contains the systems that generate the magnetic field. A motorized and computer-controlled patient table moves into the scanner’s center hole during the scan. A technologist operates the MRI scanner from an adjacent control room that contains a computer system and an intercom system for communicating with the patient during the scan.

The images from an MRI examination are called slices, because they are acquired in very small (millimeter-size) sections of the body. The image slices are displayed on a computer monitor for viewing or printed as a film. A specialist called a radiologist interprets the images produced during the MRI examination. For emergency scans, images are interpreted immediately so that the child can be treated quickly. For non-urgent outpatient MRI scans, the radiologist interprets the images and sends a report to the referring physician within a few days.

Began from a VISION, became a CONCEPT, then to a CONCRETE development, GSDH eventually became a pioneering modern hospital which opened its doors to the public on the 8th of December 1970, under the administration and pastoral expertise of the Sisters of St. Paul of Chartres. Ideally located in the heart of General Santos City, GSDH is easily accessible and it serves patients not only from the City but also from nearby provinces of South Cotabato and Sarangani,

In commemoration of AIDS Awareness Month, General Santos Doctors Hospital held an HIV/AIDS Forum at the Medical Suites along with the celebration of its  Foundation Anniversary, December 8, 2019. […]